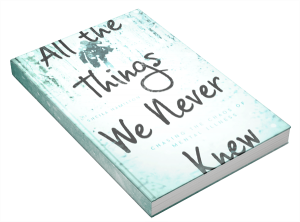 I chose to write about mental illness in All the Things We Never Knew for one reason–to give people hope. It was excruciating to watch my former husband descend into mental illness and not know where to turn or who to ask for help.

The unexpected gift of writing on this topic is that people now share their most closely held stories with me; they are vulnerable and open, recounting life experiences that aren’t generally water cooler talk.

After hearing about my book, the big burly guy who sat next to me on an airplane told me in detail about his brother, an Iraq war veteran, who suffers from PTSD so severely he sweats through his sheets every night. “He served three tours,” the man said, “and he’s still at war.”

A hairdresser told me about her battle with postpartum depression, and how, after months of seizures she believed were caused by anti-depressants, she attempted to take her life. If her baby hadn’t crawled in the bedroom as she was downing a bottle of pills, she says, she wouldn’t have found her way to recovery.

One in five Americans suffers from a mental health disorder. But, those numbers don’t hint at the tens of thousands of people who suffer in silence. Darkness wins, shame wins, and people feel more alone, and unworthy of love.

Brene Brown defines vulnerability as “Emotional risk, exposure, uncertainty.” It fuels our daily lives. As a therapist in her 12th year doing research, Brown says, “Vulnerability is our most accurate measurement of courage; to be vulnerable, to let ourselves be seen, to be honest.” What stops many from showing vulnerability is shame. Shame, according to Brown, is not guilt. It is a focus on self. Shame is highly correlated with addiction, depression, violence, aggression, bullying, suicide, and eating disorders.

So, here’s my message: If you are one of those people shaming yourself, denying yourself love, hiding from your emotions, know this. You are not alone. There are so many people who want to hear your story and they want to help. People who care are waiting to hear from you at Lines for Life, NAMI, Trillium Family Services, and your local County Mental Health services. These people will fight for you, with kindness and compassion. Be vulnerable, be open, and do not give up. Demand hope. Demand recovery. You are worth it.